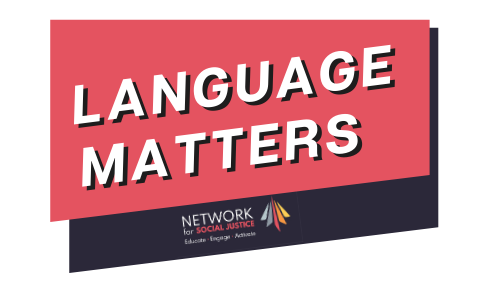 We at the Network maintain a keen awareness of the impact of language on our interpersonal relationships, our institutional policies and practices, and our culture. Language can be both a reflection of our beliefs and a powerful agent of change. Because of this, we are launching a Newsletter exploration around particular words and phrases. We are hoping to hear from you, our community, about Language Matters. What words or phrases would you like to see explored in this segment? Please email office@nfsj.org with your responses and suggestions.

Each week, a different intern or set of interns explained the above topics and later led the students as they practiced the newly acquired skills.

This edition of Language Matters offers an exploration of what it means to be an ally. When one discusses any type of social justice, allyship is a term that frequently comes up. But what does that word really mean beyond the obvious, which is about being an effective ally? On its website, the Anti-Oppression Network defines allyship as “an active, consistent, and arduous practice of unlearning and re-evaluating, in which a person in a position of privilege and power seeks to operate in solidarity with a marginalized group.” Yet another definition comes from Sam White, social impact strategist/advocate, in a conversation with Schuyler Bailar, a Division 1 athlete, activist, and life coach. Sam posits that “on a basic level, Allyship is living your belief that the struggles of other people matter just as much as if they are happening to you.” It means using your resources to take action to back up your beliefs. Adds Schuyler, “Allyship is about action or activeness. There is no such thing as an innocent bystander.” The common thread in these definitions is action.

There is no allyship without doing something for the marginalized group, and beyond the action, allyship encompasses listening, learning, and incorporating. In inculcating this process, it is expected that mistakes may be made by the privileged group. What is important is that one learn from their mistakes and move forward. While learning to become knowledgeable about a certain topic is important, even more crucial is learning about oneself and one’s identity. For instance, if you are a white person, it is important to learn about white privilege and how it operates in our society. You can then take that knowledge and use it to help people. However, without that knowledge, you will not be in a position to be effective.

Like every skill, allyship has to be learned. It is a lifelong process of building relationships based on trust, consistency, and accountability with marginalized individuals or groups. The work that you do must be recognized by those with whom you are seeking to ally.

In the spring, NFSJ interns conducted a series of five weekly workshops for Middle and High School students on this very topic. The goal was to train people on some of the concepts of allyship and thereby help them become better allies. The material covered in the workshops included:

Each week, a different intern or set of interns explained the above topics and later led the students as they practiced the newly acquired skills. A true ally must regularly listen to those around them, adapt their thinking, rework what they believe to be correct, and become comfortable with being uncomfortable. However, the end results justify the effort as it builds trust between the privileged and the marginalized, thereby providing the foundation for effective, long-term outcomes.