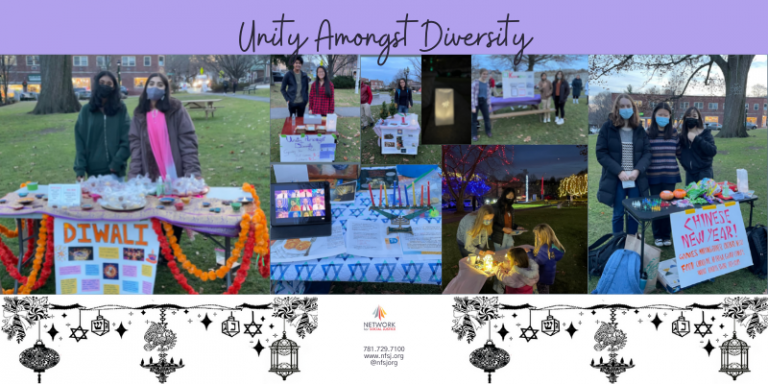 On Dec. 16, 2021, the Network for Social Justice (NSFJ), in collaboration with the Winchester High School Social Justice Club (SoJust), hosted an event called “Unity Amongst Diversity” on the Winchester Town Common. The tagline was “Festivities of light that delightfully transform the world together.” The goal was to bring about a deeper understanding of different cultures and traditions in a relaxed, fun atmosphere. Various tables representing different festivals were laid out, including the Winter Solstice, Chinese New Year, Diwali, Kwanzaa, Chalica (from the Unitarian faith) and Hanukkah. In addition, there were tables from the Network for Social Justice. Some stations offered snacks or decals for sale while others had activities. The event was geared towards families, especially those with young children.

This event provided a means to engage with the community around the NFSJ’s mission to foster a movement for systemic change to advance equity and inclusion in the town of Winchester and beyond. The relaxed environment of the festival served as an ideal ground for bringing people together. In the current divisive political climate, the importance of this event cannot be overstated.

A popular table was operated by Stella Baker, a member of the SoJust club and NFSJ intern. It represented New Year’s traditions around the world. She introduced attendees to the German New Year’s tradition called Glücksschwein, which involves making miniature pigs out of marzipan (she used model magic) to symbolize good luck in the year ahead. She felt, “it was a fun way for kids to learn about other traditions/cultures.”

At their table, NFSJ interns Ayesha Ghosh and Ananya Prabhakar spread knowledge about Diwali, the Indian festival of lights. They highlighted its diversity, as it is celebrated in many different cultures and religions. They were also able to share the beauty of Indian desserts, fabrics, diyas (lamps), designs, and decorations with a diverse group of people from within the community.

Needless to say, the event was well-received. SoJust club co-president Grace Bettencourt thanked the interns for all their contributions. “Despite the craziness that is the world right now, they managed to make time to create booths and posters and snacks and made the event what it was.” The funds raised during the event will be split between NFSJ and SoJust, with the NFSJ’s share going towards student internships. Based on the success of this event, it is possible that it could become an annual Winchester tradition.