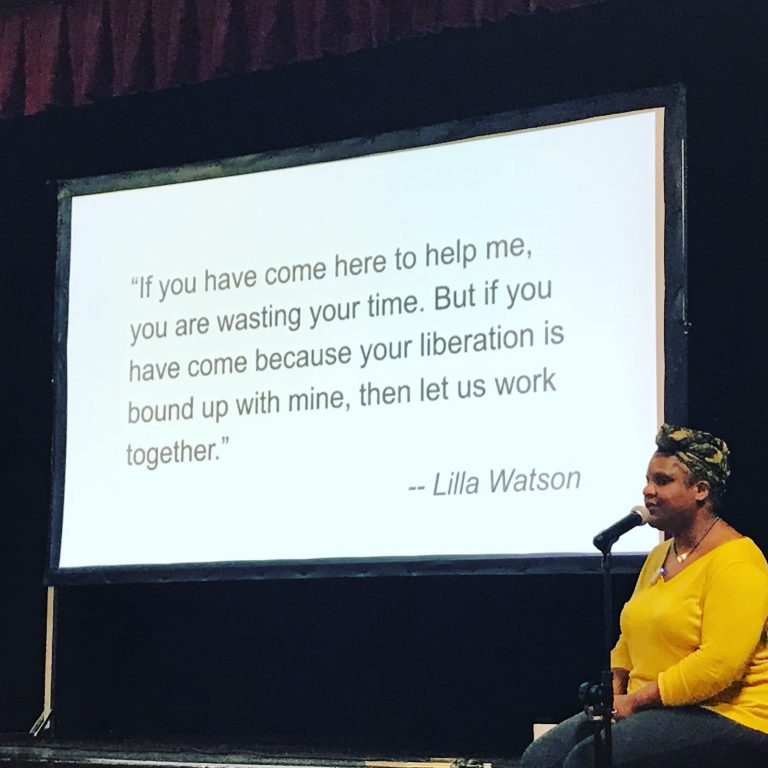 On Tuesday, January 28th, the Network and Town of Winchester welcomed racial justice educator Francie Latour, co-director of Wee the People, to present a workshop for parents and educators entitled, “The ABCs of Racism: Starting the Conversation about Race and Racism with Children.”

Latour began the evening by encouraging attendees to introduce themselves by stating their name, race, and when they became aware of what their race was. Using the introductions that were shared, Latour was able to clarify for attendees that race is a contrived notion/system of classification. She went on to define important terms in racial justice and anti-racism work, including racism, white supremacy, color blindness, and white fragility.

According to Latour, many parents and educators are uncomfortable addressing race and racism with children because they lack vocabulary and practice, plus they strive to maintain innocence and color blindness in children. She encouraged parents and educators to use books as a launching point for these conversations by integrating books by and about people of color, detecting and disrupting racist narratives with kids, and recognizing whiteness when it appears. Her framework for doing this is A-C-T, which stands for Affirm, Counter, and Transform.

Latour began illustrating this framework using the book Amazing Grace by Mary Hoffman about an African American girl named Grace who loves to engage in imaginative play who is told by a white classmate that she cannot play the part of Peter Pan because of her race. Using actual examples she had heard during her workshops with kids, she walked the audience through the three steps in A-C-T. Next, she read a passage from Milo’s Museum by Zetta Elliott and had attendees break into small groups to respond to one of several scenarios raised by children in her previous workshops.

Latour ended the workshop by reminding attendees that conversations about race and racism are ongoing and evolving conversations that may be uncomfortable at first, and she stressed that one doesn’t have to have THE RIGHT answer in the moment. She went on to reiterate the importance of naming whiteness, being critical, inquiring and educating kids when they say something racist, engaging in dialectical thinking (i.e. acknowledging two truths or viewpoints that may be valid), and not historicizing.

Attendees left with many new tools for starting and continuing conversations about race and racism with young kids, as well as new ways of thinking about combating racism as adults.