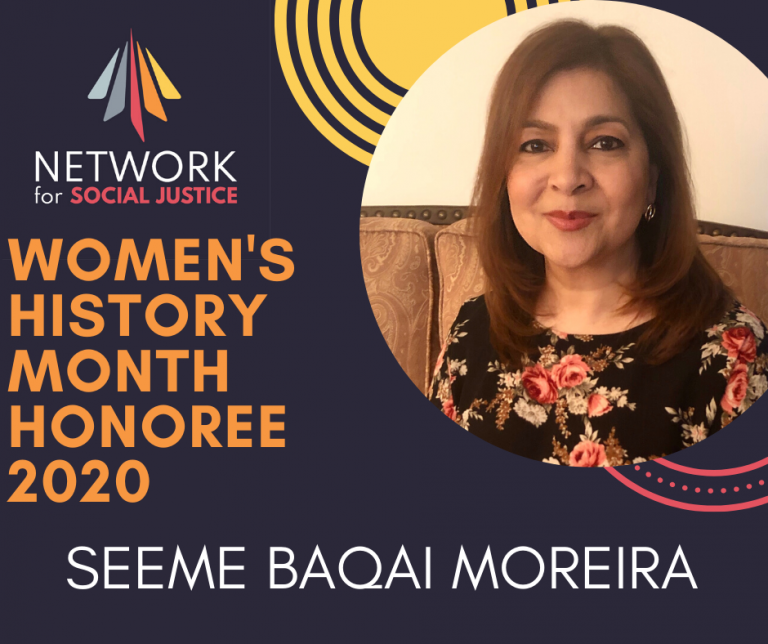 She met her husband, Mario Moreira, at college and they married in a large wedding ceremony in Pakistan. The couple settled in Davis Square and Moreira began her career in Accounting and Finance.  They moved to Winchester in 1992, where their two daughters were born. After becoming a mother she switched careers to residential real estate. With her business background, coupled with great people’s skills, real estate turned out to be a successful career choice.

In Winchester, Moreira found a community with little diversity and a predominantly white Christian culture. In order to ensure her daughters and other minorities had the same opportunities as those in the dominant culture, she joined the Board of the Winchester Multicultural Network in 2008, drawn to its mission of building an inclusive community. She served as Treasurer and on the School Impact Committee for 10 years, ensuring diverse voices were considered in school conversations. While stepping off the Steering Committee in 2019, she continues to be involved with the newly re-named Network for Social Justice on the Finance Committee.

Moreira is passionate about Kids4Peace Boston (K4PB), where she serves on the Board as Treasurer. K4PB is a non-profit that trains Christian, Jewish, and Muslim youth to become ambassadors for coexistence and justice. She is also Secretary of the Board for the Islamic Center of Boston (ICB), a progressive, non-denominational mosque in Wayland. Her current projects at ICB include a Green initiative to reduce their carbon footprint, and starting a Uyghur Language school on the premises. She is an active volunteer and fundraiser for Family Promise Metrowest, an organization committed to helping homeless families.

Through her civic engagements, Moreira hopes to make a positive impact on the lives of others. However, she measures her true success by her daughters: Aliya is a Medical student at the University of Michigan and Iman is an undergraduate at Northeastern University. She prides herself on raising engaged and caring individuals willing to champion causes and “make a difference.”

Moreira gets her inspiration from her paternal grandmother, Fatima Baqai. With a fourth-grade education and five young sons, she became a widow at age 24. Despite societal expectations in Pakistan, Fatima made a conscious decision not to remarry, and as a young, single mother with meager means, she became a seamstress to support her family and educate her sons. Her personal strength and determination were rewarded by the incredible accomplishments of all her highly educated sons who went on to become an economist, surgeon, engineers, and a banker. Moreira’s father received his PhD in Economics from the US and became a high-ranking official in the Government of Pakistan. Fatima died at the age of 74; five years later her memory was immortalized by having a hospital named after her.

PrevPreviousThe Inequity of COVID-19: A Network Perspective
NextCombating Coronavirus through a Non-partisan Response to ImmigrationNext