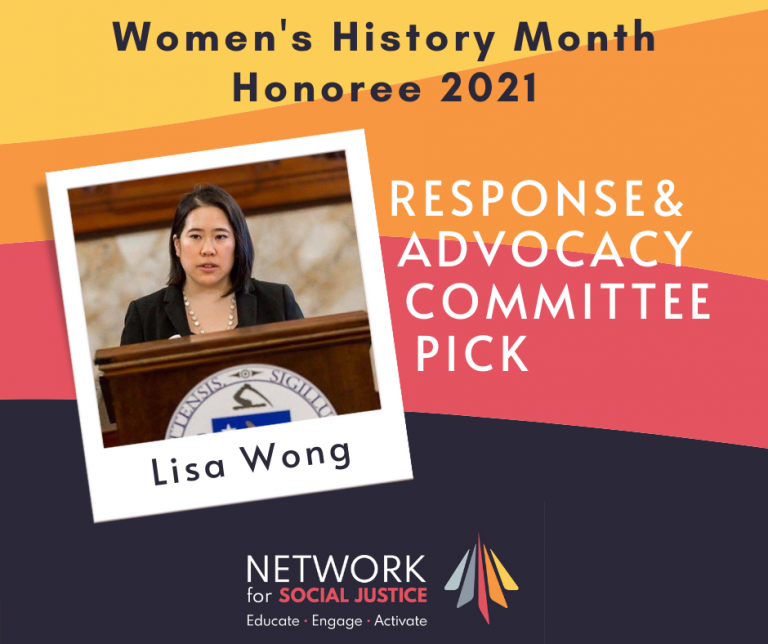 In February, our Response & Advocacy Committee notified Winchester Town Manager Lisa Wong that she was selected to be that committee’s honoree. Following the tragic shootings in Atlanta, we asked Lisa if she could add her perspective to a piece we published in last week’s newsletter. We also spoke with her about the Boston Globe article in which Shirley Leung noted she was inspired by Lisa’s willingness to speak out. The Globe description of the racist incident during last summer’s Select Board meeting neglected to mention that the racial slur directed at Lisa came from a “zoom bomber,” which we feel is noteworthy because the article provoked many conversations throughout town in reaction to the notion that a local person perpetrated the racist verbal abuse. Regardless of their source, these attacks are deeply hurtful. As a Network, it is our commitment to “call out” such actions and words, and, when possible, “call in” the individual causing offense, in the hopes of having a conversation that raises awareness, promotes mutual understanding, and builds an inclusive community.

Lisa Wong’s work in Winchester began in November 2018 when she was hired to serve as Town Manager. As the daughter of immigrants growing up in a North Shore suburb, Lisa learned early the strong link between integration and acceptance versus authenticity and exclusion. As a teen, Lisa started organizing for political and human rights and also started a Special Olympics Swim Team in an effort to urge her high school to be more inclusive of athletes with disabilities. She continues to feel the guilt and anger that the model minority myth has been wielded as a racial wedge and the awareness it takes to not be complicit and to challenge ingrained and harmful doctrines.

While she readily admits that society has come a long way, recent upticks in stereotypes, bias, and mockery towards Asian Americans is a reminder of the work still to be done towards achieving racial justice, equity, and inclusion. Personally, she has experienced more racism in 2020 than in any other time in her life, which she attributes to the highly visible hate speech at the national level and the scapegoating that is unfortunately too typical in times of social, economic and health crises. The quantity of these incidences has left her shaken and she acknowledges when that kind of stress is present and can’t be escaped, it’s complicated to address and overcome.

Lisa believes that work done at the local level is integral to combatting systematic oppression and adds that joining with allies is critical to making improvements. Her own personal experience with racism highlights this need for support and allies, which is humbling because she is much more comfortable serving in the role of the supporter and ally. Still, she feels lucky to be in positions to empower herself and others, as it helps her make sense of senseless situations.

Lisa feels fortunate to be building community and having conversations to directly address anti-racism in Winchester with allies working on issues of equity and anti-racism. The work of racial equity and justice is ongoing, but Lisa believes it is an integral part of her position as Town Manager. Progress will mean integrating equity into town policies, practices, debates, budgets, and plans; bringing a racial equity and justice lens into discussions around transportation, capital improvements, education, and mental health; and bringing underserved and diverse voices to the table. Recently the Town hired a consultant to help the municipal government set realistic short and long term goals. Lisa credits work done by The Jenks Center, as well as the Master Plan and the Climate Action Plan, as examples of ways that the town is prioritizing racial equity and has raised the discourse and visibility of the work. The town is making improvements in the Lynch and Muraco school districts, and implementing changes in the Winchester Police Department as part of statewide police reform efforts. There have been some disappointing setbacks, such as when the courts rejected the Town’s arguments against locating Eversource’s project through an environmental justice neighborhood in Winchester.

Lisa acknowledges that town governments are complex and decision making can be a lot more time consuming than her previous role as a mayor, a role that made her aware of the power that elected officials can have, especially working alongside staff, non-profits, community leaders and other stakeholders to set a strong vision, accountability and ultimately, progress.  Organizations can play a major role in tracking and amplifying issues, as well as organizing and lobbying. The state’s Asian American Commission and the national Stop AAPI Hate movement are just some of the organizations combating the skyrocketing violence against Asian Americans and Pacific Islanders during the pandemic. However, we all have a role to join against anti-Asian racism, which has been a part of this country for generations.

Lisa’s mentor for the past 20 years is a community activist named Marion Stoddart, who defied many social norms in both her personal and professional life. The children’s book A River Ran Wild by Lynne Cherry was written about her. Though she is now in her 90s, Marion still takes time to go kayaking with Lisa and offers her gentle reminders to surround herself with positive people. Marion’s achievements have been the subject of an award-winning documentary and she has been recognized by the United Nations. Plus, she was still able to step away from her conservation work for a time and start a travel company for women over 40 and led countless trips around the world. Lisa backpacked solo around the world between the ages of 19-21 and Marion’s adventures later in life is a strong reminder that Lisa’s best travel days are not behind, but ahead!

Share on facebook
Share on twitter
Share on linkedin
Share on print
Share on email
PrevPrevious#StopAsianHate Lantern Ceremony and Candlelight Vigil
NextNetwork, Planning Board & Housing Partnership Board Present Affordable Housing Program Part INext
Since its inception, the Network has been profoundly inspired by the teachings of Dr. Martin Luther King, Jr and sought to thoughtfully engage the community in honoring all that he stood for. For the past three years, this has taken the form of the MLK Day of Service, the last two of which have been held virtually.
Make a donation to the NFSJ today to fund these accessible and creative community-wide celebrations and similar programs to advance an inclusive and anti-racist community in Winchester!