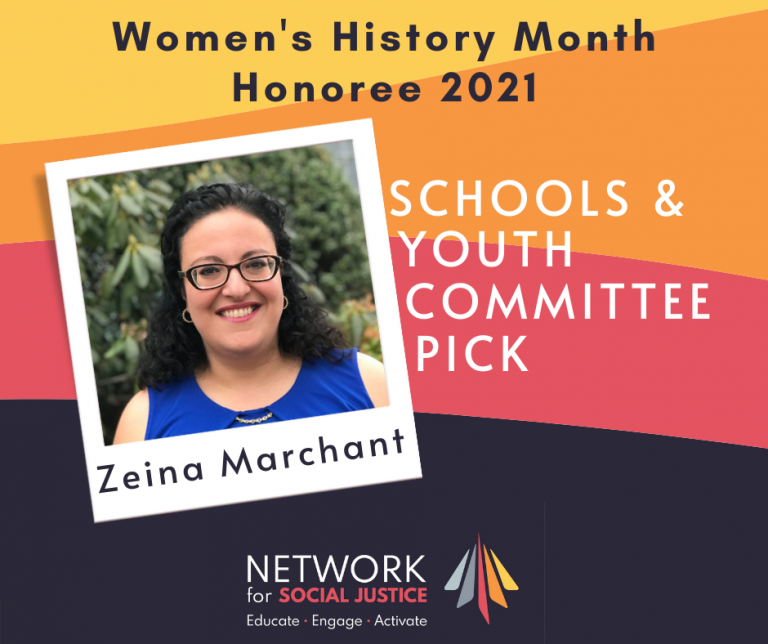 Born during the Lebanese Civil War, Zeina Marchant and her family were forced to flee Beirut when she was 7. Her family was welcomed by relatives who had immigrated to Chicago, Illinois, where she spent most of her life. Zeina attended Illinois Wesleyan University and received a law degree from Loyola University School of Law. Her personal history as an immigrant inspires her to plant roots and grow community.

In 2012, Zeina moved to Massachusetts with her husband and two young sons, eventually settling in Winchester, and began volunteering as communications director at the Massachusetts Chapter of the National Organization for Women (MASS NOW) in Boston. There, she met local Boston activist, Monica Cannon-Grant, who inspired Zeina to engage more locally. This led Zeina to connect with former Network Executive Director Aba Taylor. The more Zeina learned about how the feminist movement disenfranchised Black and Brown women, the more determined she was to get involved and support Aba while learning more about social justice advocacy. Soon after, Zeina connected with new local social justice groups, including Winchester for Peace, and used her organizing skills to help local food banks and underserved students in Boston.

When her children entered Lynch elementary school, Zeina got involved with their Parents Association, volunteering her time crafting their weekly newsletter and working as a greeter. Inspired by the inclusive community of families and educators and Superintendent Judy Evans, Zeina ran for School Committee, eager to represent the Lynch community and diverse learners. While serving on School Committee, Zeina helped lead the policy change to better accommodate transgender students and was an outspoken ally and supporter of the WHS mascot change. In addition, Zeina helped organize the 2020 MLK Community Day of Service toiletry drive for the Council of Social Concern.

Though she is not seeking reelection to the School Committee, Zeina will continue to work on making our community more equitable and inclusive. She is concerned with the polarization of our nation and the challenges it faces around race and equity. Zeina is dedicated to helping address our community’s challenges by advocating for inclusive policies and resources for funding anti-racism education—and by listening more and assuming less. She will continue to work with community leaders, organizations, and schools to work out difficult issues and form a consensus about the work ahead.

Zeina continues to deepen her work with Violence in Boston, a local organization that fights racial injustices, founded by Boston activist Monica Cannon-Grant. Through her work as a Violence in Boston board member, Zeina helps powerful community leaders achieve success by bringing their visions to life. Zeina is grateful for all the support Violence in Boston has received from the Winchester community, including donations of food, money and services.

Zeina is most inspired by three special women. Firstly, her grandmother, a busy mother of 11 children and a humanitarian in Beit Maryam, Lebanon who created a welcoming community in her own home and reached out to those in need—particularly the nomadic people who faced harsh discrimination. Second, she is eternally grateful to her mother, who immigrated to the US with three young children and sacrificed to provide her children with opportunity and access to a great education. Locally, she is inspired by Violence in Boston founder Monica Cannon-Grant, whom Zeina calls a “true visionary” for the ways that she has fought the system within her own community by creating solutions from her own lived experiences. For more information about Violence in Boston visit: www.violenceinboston.org.