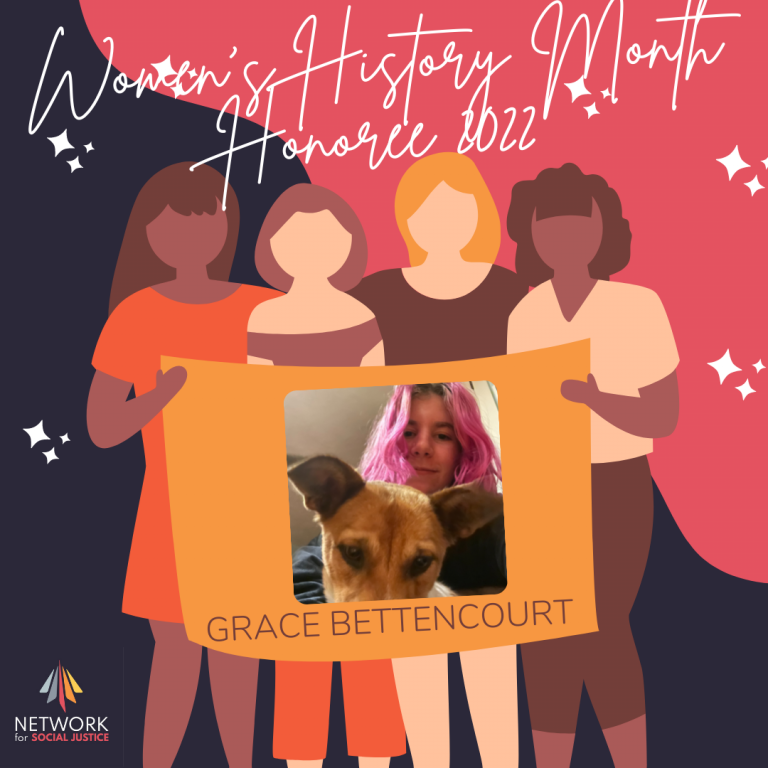 Grace Bettencourt, a junior at WHS, got involved with social activism in just 6th grade, after the 2016 election between Donald Trump and Hillary Clinton. According to Grace, “I couldn’t wrap my head around how the country could choose someone so hateful.” She educated herself on many of the social issues, like racism, for example, that still plague society. She feels that schools would do more to teach students about current social ills.

Over the years, Grace has built an enviable resume. To name a few – helping in local elections for both senator Jason Lewis and state representative Michael Day, working on Paul Brodeur’s campaign, and rallying and phone-banking for presidential candidate Pete Buttigieg and, after he dropped out of the race, Joe Biden.

Closer to home, Grace worked on the removal of the Sachem logo last summer. As an intern with the NFSJ, she worked on multiple racism workshops, helped to organize the Ruth Bader Ginsburg vigil in October 2020, and assisted with running Winchester’s first Pride Fest in June 2021.

She is the co-leader of the SoJust club at WHS and is also a part of an Affordable Housing Coalition, which is working with the Citizens’ Housing And Planning Association (CHAPA) to raise awareness about housing and grow the membership of the coalition as a whole. She is also, along with Arya Ramachandran and Sophia Ventura, a co-founder of the Winchester Students for Affordable Housing Coalition.

Grace feels that her work in affordable housing is her “biggest accomplishment.” Typically, housing matters are something that is “heavily adult run” and, as a student, she used to feel “cut off or ignored in those type of meetings.”  She is happy that she is now able to work with fellow students on it, and she hopes that the student-run housing coalition can spread to other towns.

When asked about women who have inspired her, the response was eclectic.  There was Maika and Maritza Moulite, two incredible Black female authors, “whose work has touched me, and made me think deeper than a lot of other books I have read.” Phoebe Bridgers is someone who is continuously making progress for women in the music industry. Grace also follows the work of Radhia Rahman, “a really cool queer desi artist,” who runs her own internet business and puts out online content, in addition to being an activist, as well as Black Belt Eagle Scout, a Swinomish and queer feminist and alternative artist.

What does the future hold for Grace Bettencourt? As she graduates high school and moves into college, she wants to stay involved and work on more campaigns, perhaps even get involved in some legislation, and work for more people in government.