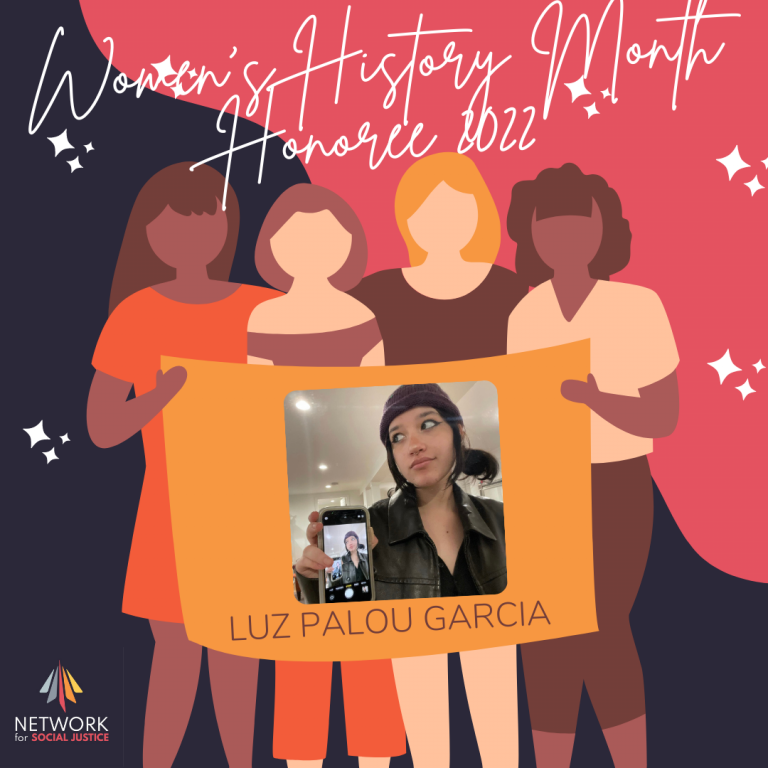 Our honoree this week uses she/they pronouns. As such, we have used them interchangeably throughout this piece.

Luz Palou Garcia, a senior at Winchester High School, has been organizing since 8th grade and has been aware of social issues since she was young. “I was always a heavily opinionated kid and my parents gave me the space to share and learn about the things I was passionate about so when I  saw the need for change and was feeling helpless without acting on a larger scale, I had to get involved.”

Luz grew up in Mexico, and when asked what prompted them to dedicate their time to organizing, they said, “As someone who grew up close to Mexico City, a place heavily affected by pollution, the climate crisis was something I learned about and was affected by early on in my life. As a result Climate Justice took a forefront in my focus for Social Change. Climate Justice is a way of framing how we respond to the climate crisis, and it considers the ways in which the climate crisis disproportionately impacts marginalized communities. It is a human-centered approach to solving the climate crisis, it expands the conversation to a political, ethical, and moral realm instead of just the hard science. The climate crisis has always been an intersectional movement that intersects with workers’ rights, racial justice, women’s rights, indigenous sovereignty movements, class struggle as well as many other issues.  When talking about Climate Justice, you are fighting for equitable, fair and inclusive solutions to the climate crisis that will help create a better world for all. Intersectional social change, in my opinion, is the best way to fight for real sustainable change.”

In 2018, when she was in 8th grade, Luz organized McCall Middle School’s walkout against gun violence in the aftermath of the Marjorie Stoneman Douglas High School shooting in Parkland, FL. In the summer of 2020, they joined the Boston Climate Strike as the art director of the organization, overseeing all creative aspects, including social media, making banners, and promotional content. Later, she became one of the 4 General Coordinators, in charge of 200 youth from Greater Boston organizing climate strikes, climate-related events, and creating educational content to spread.

Luz talked to us about some of the struggles they faced while doing this work. One of the biggest challenges has been getting taken seriously by adults in organizing environments, as well as by politicians and people in power. “Many young climate activists can tell you time and time again how many times people in power have thanked us for the work we do, which can be incredibly frustrating, when they could be the catalysts for real change but they never really act.” Luz has overcome this by not letting her age or others’ perceptions limit her from speaking their mind.

Luz’s accomplishments are incredible. With their involvement, the September 20th Boston Climate Strike drew 10,000 people to City Hall. She also organized the December 6th Climate Strike, with a turnout of 5,000 people. Recently, they have focused their attention on more community-based work. She wants to use the organization she helped build to uplift and empower other movements that intersect with the climate crisis. According to Luz, “I saw a need for more people with my perspective or background to get involved in order to make the work we do more inclusive and just.”

Since this article is honoring women, we asked Luz who inspires them. The woman who has been a large factor in her life and inspired her social involvement and political knowledge has been her Grandma Rosalina. Rosalina was an activist in Nicaragua and Chile when she was the same age as Luz, and growing up hearing her stories was incredibly inspiring to them.

As Luz goes past high school and into college, we asked what she hoped to continue to do with her activism and organizing work. Luz said that they hope to get more involved with community-based work such as mutual aid. As she enters college, she wants to continue to tie her art work to her social work, hopefully on a larger scale. They also hope to one day collaborate with Cosecha Massachusetts, a group fighting for permanent protection, dignity, and respect for the entire undocumented community, which largely intersects with the climate movement.